The ISM International Model Schools Project ran for six years, from 1989 to 1995, and entailed ISM onsite data collection expeditions (usually three per year) to eight to nine private-independent schools annually. The project focused upon relevant factors in student performance, satisfaction, and enthusiasm, and, secondarily, on teacher performance, satisfaction, and enthusiasm. That project's outcomes produced two books, numerous articles for ISM's periodicals, and ISM's Meaningful Faculty Evaluation system. Those building blocks served, in turn, as the foundation for later ISM studies of School Head leadership and Board President leadership. Finally, the original outcomes and subsequent research projects were layered systematically into the several iterations of the ISM Stability Markers® and, more recently, the 20 ISM Success Predictors for the 21st Century.

In the school year 2010-11, ISM conducted a one-year partial replication of the original project, this time with eight private-independent schools. The mix of schools, as with the original project, included the full range of possible grade configurations, religiously affiliated and secular, single-sex and coed, and boarding and day. Because of the results of the survey, ISM has revised its Student Culture Profile, Faculty Culture Profile, and Characteristics of Professional Excellence instruments-all included in this report. 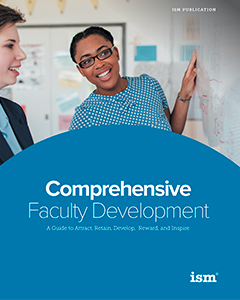 Create a flourishing school culture which encourages teacher growth and innovation, while providing predictability with a faculty evaluation system that holds faculty accountable with clear expectations for performance and professionalism.

Comprehensive Faculty Development: A Guide to Attract, Retain, Develop, Reward, and Inspire is your road map to separating these processes. Use it to reframe the very structure that surrounds growth and evaluation systems and transform the way your school supports its faculty. 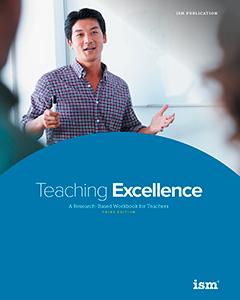 How do school administrators help faculty members develop their skills; teach with excellence; and enhance student performance, satisfaction, and enthusiasm?

This workbook is tailored for teachers looking to further develop their careers and improve their impact on their students. The guidance leads teachers through a self-directed analysis to develop stronger teacher-student, teacher-teacher, and teacher-administrator relationships. The book includes guidance on predictability and supportiveness, teachers as leaders, learned optimism, parenting, revisiting your academic roots, community assessments and responsibility, and much more.

"Predictability and supportiveness"—the paired set of critical classroom conditions and organizational ingredients—have been found in greatest strength in schools where teachers genuinely desire student success and work to elicit that success. This book is geared to help teachers achieve these goals.

Buy On Amazon
See all products